The Temple of Fate Bonus Chapter

Can one ever really be ready for an audience with the Empress and her Viceroy? But Mortam Rowe just nodded politely.

Harnotis Kodd fixed him with a reproving look for a moment, then turned away and signaled to the green-liveried guard that they were set to enter.

The man knocked once and Mortam Rowe heard a muffled command from the other side of the door. The command must have been something affirmative because the guard opened the door and stepped to one side so they could enter. Harnotis Kodd was barely able to squeeze his bulk through the door.

Mortam Rowe was sure that the mage would have preferred that both of the double doors be opened so that his entrance was less labored.

They walked into a dark, cavernous reception hall—each step echoing throughout the stone chamber. Another pair of guards stood at attention on this side of the door. One motioned to Harnotis Kodd.

As his eyes adapted to the gloom, he could make out lofty tapestries hung on the walls twenty feet up. They were arranged in between the double rows of intricately carved stone pillars inlaid with softly glowing lightstones. Set against the walls were massive, blocky wood cabinets filled with all manner of trophies, gifts, and objects of art.

Harnotis Kodd paid no mind to their surroundings. His head was held high as he purposefully made his way down the hall towards a long, ornate table in front of a huge, floor-to-ceiling window.

Seated at the table were a distinguished-looking man with close-cropped grey hair and the most beautiful woman Mortam Rowe had ever laid eyes upon.

“Your Imperial Majesty, Viceroy,” the guard announced. “May I present Harnotis Kodd and his man Mortam Rowe…”

As he drew closer, Mortam Rowe saw that the Empress was regarding him with piercing green eyes. He tried not to stare back, but her visage was so perfect, she didn’t seem mortal. All the air seemed to vanish from his lungs and he could feel his heart pounding in his chest.

The voice of the Viceroy Bryn Eresthar broke the spell.

Bryn Eresthar turned to Mortam Rowe. “I’d like to hear directly from you, sir.”

“As you please, Viceroy.” And so Mortam Rowe carefully, yet concisely began to tell his account, just as he had rehearsed. But he didn’t get very far. At the first mention of Leocald Grannt’s name, Bryn Eresthar blanched.

“He was a giant, sir. Heavy with muscle. A hard look about him. About your age, but more grizzled.”

“Bander!” Bryn Eresthar exclaimed. He was clearly agitated. “I should have known. That old coot Valthar roped Bander into helping him.”

A flash of recognition played over Harnotis Kodd’s face as well. “I know Bander! Big brute of a man. Silbra Dal brought him to my estate several times when they were escaping from Asryn’s forces.”

For the first time, Empress Ardara spoke. Her voice was commanding, even when asking a question. “Bander was with your group the first time I met you, wasn’t he?”

“Yes, he was,” Bryn Eresthar said. “An unforgettable man, to be sure.”

Her expression darkened. “You told me he wasn’t involved with anything. You said he was a wanderer.”

“He is. And normally he keeps to himself—unless someone threatens him or someone known to him.”

Harnotis Kodd said, “He’s no longer a concern now, though. Somewhere lost in time, I daresay.”

“What?” Bryn Eresthar stood up and paced towards them.

So he did. He spoke of interrogating Eton Sward in Irfals and how Leocald Grannt appeared there and through some freak of happenstance had gained the upper hand.

Mortam Rowe continued with his account, relating their journey to Malverton and the planting of a waypoint gem with Talessa Kreed so they could teleport to her destination. He told of tracking the group through the underground complex beneath the Temple of Fate and eventually joining with Valthar, Leocald Grannt, and Talessa Kreed and discovering the Nave.

“You didn’t try to enter it, did you?” Bryn Eresthar asked.

“No, Viceroy. But the woman did. And promptly vanished. At that point, Valthar and Grannt attacked us. Keave and I managed to hold them off, and while we were regrouping, they fled to the Nave and vanished as well. I had half a mind to send Keave after them, but I had discerned enough from this Valthar character to know that the Nave was a trap.”

Bryn Eresthar shook his head. “If Bander set foot into the Nave, he knew what he was doing.”

“Of course he did,” Empress Ardara said. “They had the aona in their possession. They walked through a time gate to 752.” Her eyes clouded with anger.

“Tell me again of this waypoint gem,” Bryn Eresthar said.

“That is how we tracked them to the temple, sir. It had been secretly sewn into Talessa Kreed’s satchel.”

“How did you manage that?”

Harnotis Kodd answered, “We bribed her steward. It was a simple matter.”

A look passed between Eresthar and the Empress. Then he nodded at Kodd. “You will travel to this temple and verify all this yourself and then report back to me. Do you understand?”

As he turned to depart, Mortam Rowe noticed that the Empress was still staring at him. Her gaze chilled him.

Once they were well away from the reception hall, Harnotis Kodd said, “I am not happy about this, Rowe. Not happy at all. I normally don’t make it a habit to tramp through the jungle.”

“Keave will take us there. Directly, I mean.”

“Of course he will. It’s a damned imposition, though. There will be muck, and traps, and all sorts of bother. Still, an order is an order.”

“Do you mock me, Rowe, with your insincere agreeability?”

“Of course not, Master.”

“I think you do, and I rue the day I decided to bring you into this affair.” Harnotis Kodd scowled at him.

As do I, Mortam Rowe thought. As do I. 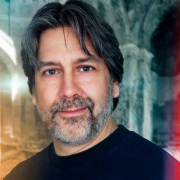 for reading The Temple of Fate. I hope you enjoyed it. Please feel free to drop me a line with your comments. I’d also be eternally grateful if you would take the time to leave a brief review on Amazon or wherever you purchased the book. Reviews are exceptionally important for indie authors like me who depend on word-of-mouth to help find new readers. Thanks in advance for your help.

• Link to Amazon for reviewing