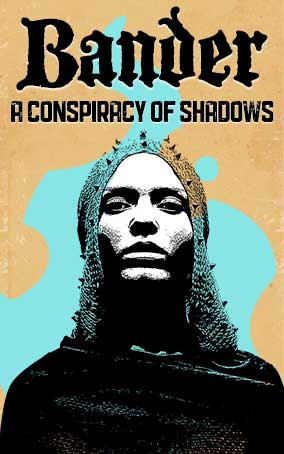 Get the ebook
View on Amazon
Paperback Now Available

A Conspiracy of Shadows

Book 2 of the Bander Adventures

“Epic fantasy for people who are tired of the usual elves, dwarves, magic swords, and talking dragons.”

Dark forces seek to topple the Mage Guild and the Empire itself. But one man emerges from the shadows to battle them.

When retired Imperial Investigator Bander reaches into a hollow to retrieve his cache of gold, he finds it missing and something else in its place: a scrying stone with a message from a mysterious young sorceress. She desperately needs his help in solving the murder of Tobin Leroth, a renowned mage and one of Bander’s oldest friends.

The motive behind Leroth’s murder are known only to the secretive Mage Guild, but as Bander gets drawn deeper into a deadly mystery that involves the highest powers in the realm, he finds himself battling the same dark forces he suspects killed his friend. Only this time, they’re hunting him…

“I read and thoroughly enjoyed THE LORD OF THE RINGS and Ursula K. LeGuin’s WIZARD OF EARTHSEA stories– but aside from those books, I’ve never been a fan of sword and sorcery. I’m more drawn to thrillers and action/adventure stories in the vein of Lee Child’s REACHER novels. But now there’s BANDER– a kind of cool hybrid of genres I love– a fantasy/mystery/thriller series. A combination of the action, excitement and physicality of REACHER/DIE HARD/BOURNE, and the rich mythology and other-worldliness of GAME OF THRONES. It’s really nice to see the author bring BANDER and company together in a full length novel. It’s clear from the conclusion of CONSPIRACY OF THE CAGE that the story is far from over, so hopefully the next one will be out soon. Bander’s kind of addicting!”

“The Bander saga is action packed and fast moving. I’m not a fantasy fan, but this story is intriguing. It is full of imaginative situations, heroic fights and a wide range of characters that are sure the reader will recognize, in spirit if not in reality.”

“This was entertaining. I found most of the characters interesting, if not likable. Did not see the direction the plot was taking, starting with a single murder and graduating to widespread conspiracy and mass destruction. A “potboiler” with a “cliffhanger” ending (?). Looking forward to what happens next.”

“This is the first Bander adventure I have read. And I LOVED it. An action-adventure, thriller/fantasy it is a fast-paced read. Kept me on the edge of my seat to see how it would come out.”